In the previous post in Spanish, I tell the story of arriving on my friend’s family farm in the mountains of Antioquia, Colombia and participating in a sort of spontaneous coffee ceremony around using an electric coffee grinder for the first time.

In traditional Colombian farming households, coffee growing families would roast leftover coffee (that didn’t make the cut for selling) on the stove top and then grind it using the same manual grinder used for grinding corn to make arepas. Luis, the son of the family I was staying with, had attended a “Coffee Quality: Basics of Cupping” course put on by the local coffee buying co-op in conjunction with the departmental coffee committee and the government of the department of Antioquia’s “Antioquia La Mas Educada” campaign, and at the completion of the course earned a green backpack full of equipment for coffee preparation.

It was April of 2013 when Luis first demoed the black Hamilton Beach coffee grinder, and a year later at the SCAA conference in Seattle I had the pleasure of meeting Sergio Fajardo, Governor of Colombia’s Department of Antioquia and the mastermind behind the department’s “Antioquia La Mas Educada” initiative, one of the parties that made Luis’s Coffee Quality Course possible.

Mr. Fajardo was honored at the Coffee Quality Institute’s (CQI) luncheon during the second to last day of the conference. He was awarded with CQI’s Medal of Merit for his work on the Antioquia La Mas Educada campaign, which encompasses many initiatives, including promoting Antioquia’s coffee to the world and training producers in the skills needed to produce differentiated specialty coffee. Mr. Fajardo opened his acceptance speech with, “They told me I only have 8 minutes. But it took me two planes and 17 hours to get here, so I’m going to take as long as I need tot tell you about my country.”

Before he became governor of Antioquia, Mr. Fajardo was mayor of Antioquia’s capital city of Medellín. Before that, he was an accomplished mathematician, as evidenced by his professor-like slides. (click to enlarge) 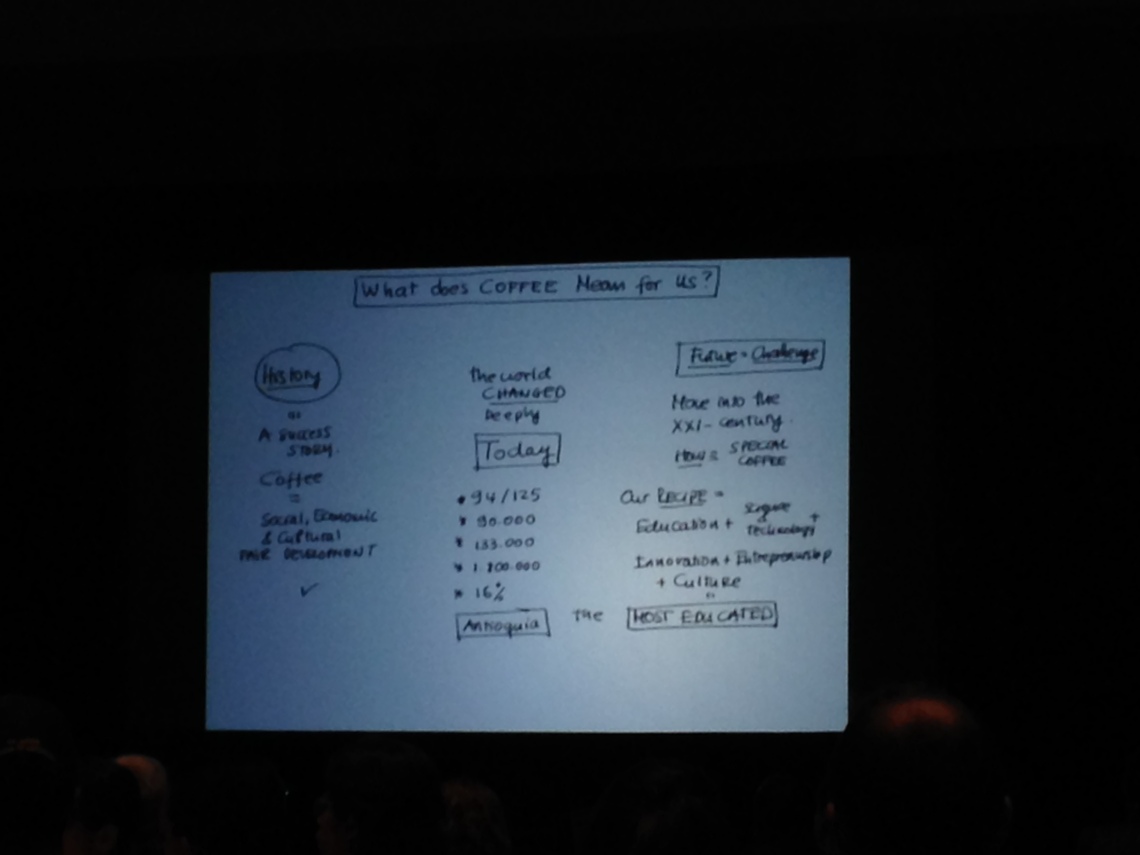 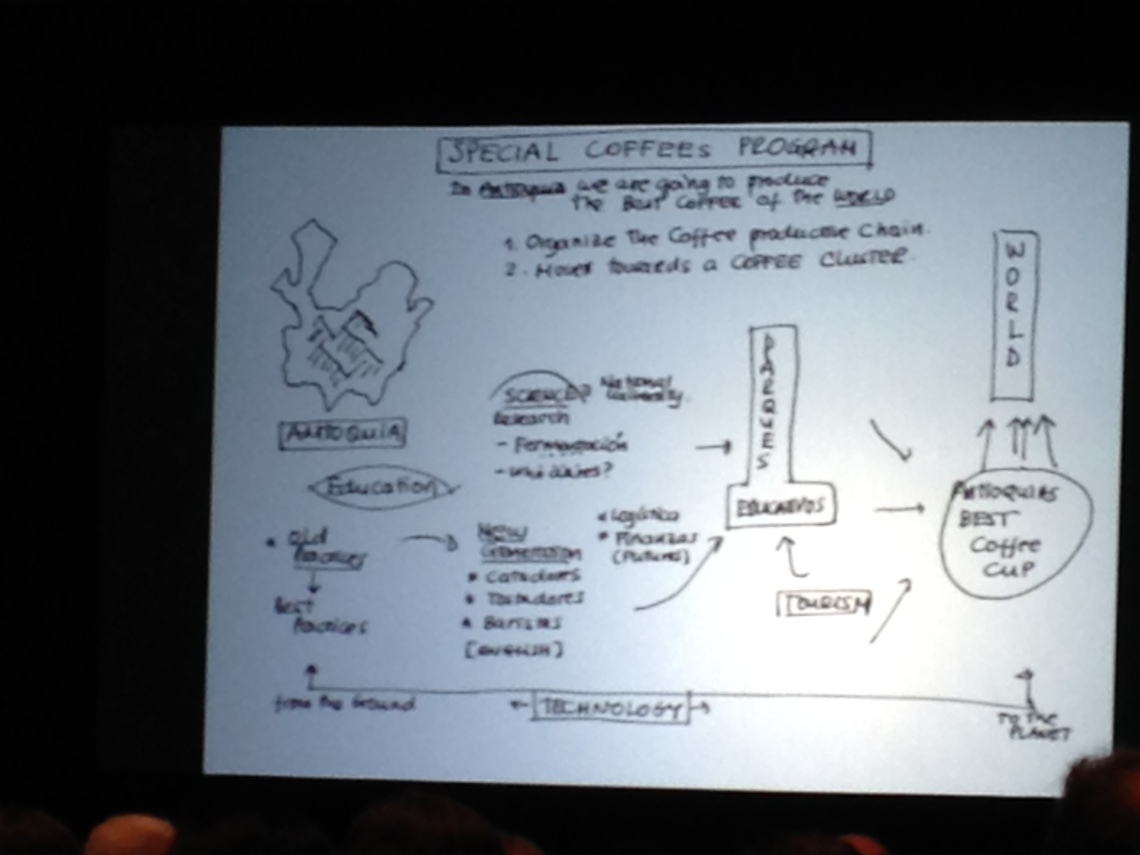 His prior work in higher education makes Mr. Fajardo one of the few people who realizes the invaluable connections between raising the standards of agriculture—and thus the monies farmers receive—and education at the highest level. Not only does Mr. Fajardo realize the connections, he builds new connections, and he brings his entire electorate with him.

This puts him in the serious minority, but luckily the visibility and success of his Antioquia La Mas Educada platform is making a remarkably strong and public case for the way agriculture and education are not at all mutually exclusive–as both farmers and educators often perceive them to be–but rather very mutually supportive.

There is a stigma among hardworking farmers—of coffee and other crops—that the man sitting in an office pouring over a stack of paperwork is not actually working. For agricultural producers, there is a perception that extended physical labor is the only indication of the level of hard work that warrants respect.

is a full time agronomist with the Coopedota cooperative in Santa Maria de Dota, Tarrazú, Costa Rica. He knows every one of the co-op’s 800 some members by name, visits their farms regularly to troubleshoot, and is a deciding voice in what agrochemicals the co-op company store will purchase. He is one of the sharpest, most active, involved, and jovially hard working coffee people I met in my travels. He has a small office in the corner of the co-op company hardware store, and he told me, “even some producers who I’ve known for 30 years, who’ve seen me on my feet on their farms for decades, who value and heed my advice, if they ever come by the store and see me in my office reading or writing something will always say, ‘Daniel, still just sitting there on your laurels I see?’”

Many people who’ve been working the land for their entire lives would rather be digging holes and filling them back in just to do the kind of physical work they deem gratifying rather than sit down and read through a textbook about improved agronomic techniques. This is the obstacle Daniel, and other agronomists, face when trying to explain that record keeping can lead to lower overall costs, that taking notes about observations of flowerings can help you plan for applications of fertilizers. Many farmers don’t want to take notes. They prefer to continue to lug the same volumes of inputs up the mountain because they truly believe that nothing valuable can come of pen, paper, and sitting on ones laurels to use them.

Unfortunately, some researchers are of the inverse bent. They think that, with enough study and tracking and charting and plotting and planning, all you will need are a few smart designers and a bunch of interchangeable hired hands to execute the divine ordinance handed down from the all-knowing academics. They consider manual labor to be something you do only when you are not capable of charting and plotting.

Luckily, Mr. Fajardo knows that neither extreme holds any potential for improvement, and he is all about improvement. He knows that people who love hard manual work have to learn to value the insights that come from formal education, and that people with the formal education have to remember to deeply value the inherent importance of grueling, physical labor to the sustenance of any society.

Mr. Fajardo is a mathematician, but at his level of study one also has to become a bit of a philosopher. His goals are guided not by the frenzied fervor for a quick fix and attractive stats that so often characterize the working style of politicians; deep, concise convictions inform his actions. In his presentation Mr. Fajardo outlined Antioquia La Mas Educada’s principles as “consistency and coherence, coherence being where no step will contradict previous steps.”

All steps march towards an Antioquia where all 6.5 million inhabitants in the 125 municipalities (94 that grow coffee!) of Colombia’s most populous Department will lead lives full of intelligence and decency. In Spanish, the word “Educada” means both “educated” and “polite,” also simultaneously implying ideas of “correctness” and the basic good manners that come from the decency of one human towards another. It might not seem like “decency” warrants its own political slogan and associated public service campaign, but in Colombia decency is a new and precious currency.

It is no secret that Colombia, and Medellín in particular, led the Americas in violent drug related crimes not very long ago at all. Murder is not the stuff of movie plots in Mr. Fajardo’s city it is a harsh chapter in all family histories. A young man in his 30s, born, raised, and still living in Medellín, recently spent several years working in the mines near the jungles near the Ecuadorian and Brazilian borders. He told me, “We’re missing a generation of men here. All of my friends are dead. A few of them died in the mines, but most of them were killed. Everyone I grew up with is gone. I’m the only one left.”

“The Most Well Behaved State!” might ring corny and contrived as a US state motto, but here the euphemism of “Antioquia La Mas Educada” is really saying, under its breath and behind the political niceness of the phrase, “Antioquia, the place where we are too well behaved to keep killing each other.”

The genius of the phrase is in what it affirms and in what it eschews, and it speaks to Mr. Fajardo’s mathematician/philosopher wisdom. Cognitive science tells us that the positive is always more successfully reinforcing than the negative. Repeatedly telling children “don’t fight” will always be a less successful instruction than “play nicely.” Even though they imply the same desired behavior, the first repeats the word “fight,” and is delivered as an aggressively negative demand. Children who hear that will not remember the implied meaning, they will remember a tone of negation and the word “fight.”

Children who repeatedly hear “play nicely” don’t have “fighting” introduced as a possible option in the language of their instructions, and they also don’t have to figure out what the command is implying; they can simply do as it says. Any mandate saying “don’t do something” leaves the gaping, gray “well then what do you want me to do?” Mathpeople like Fajardo know that you can solve for x and you can solve for y, but you cannot turn one into the other.

Even more powerful than the instruction “play nicely” is the preemptive praise “thank you for playing nicely,” delivered even before children have begun to play. With that wording, the children know that playing nicely is not only the instruction, but the resolute social expectation. People will rise to the expectations contained in preemptive praise with alarming alacrity.

When I instructed high school students to “turn to page 32” there was always a higher compliance rate than if I were to say “stop carving your name into the desk,” but when I told a students, who were somehow off-task (whether name carving or otherwise) “thank you for turning to page 32,” never once did a student do anything other than modify his or her behavior to get to that page.

Affirming that Antioquia is the most well behaved (read least murderous) Department in Colombia is the kind of positive praise that Antioquians have been too long starved for. If the platform were “Stop the Violence!” the word “Violence” would be scrawled on billboards across the country. Now, a green check of success, the kind that everyone wants to be associated with, accompanies the positively loaded word “Educada” on everything from billboards to backpacks, from baseball caps to mouse pads.

Mr. Fajardo closed his presentation/award acceptance speech with the idea that in order for people to feel dignity, they must feel recognized. When people feel dignified they automatically act in ways that are more “educada,” more educated, polite, and decent.

Internally, “Antioquia La Mas Educada” acts as an affirmation for Colombians long assaulted by a plague of indecent actions. Externally, the slogan serves as what appears to be a marketing campaign. In essence, that’s what it is, an effort geared at raising awareness among importers, roasters, and drinkers as to the flavor merits of coffee from Antioquia. But, in the case of Antioquia, the external marketing campaign serves to generate the recognition for the work Antioquia’s coffee producers are already doing. Antioquians can point to Antioquian coffee earning praise in cafes around the world an tell each other, “See? People love what we do. What we do matters.”

Education and agriculture. Coffee and dignity. Fajardo and Antioquia are proving that building mutually supportive exchanges is the perfect formula for equations that will always yield something positive.