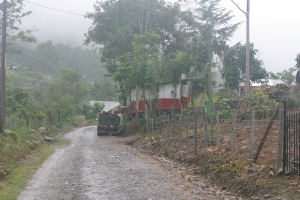 Coffee cherries being loaded from the receiver into the beneficio truck.

Costa Rica and Nicaragua: two countries with histories and current realities intertwined but each with their own way of handling coffee.

In Costa Rica the action of picking is coger (most literally translated as “to take”) and the day’s harvest is la cogida, which is measured in cuartillos, cajuelas y fanegas in containers regulated by the national Institute of Coffee (ICAFE).

Most farms are family owned and under 4 hectares. Lots of families have land in several places, and may live on one plot with some coffee and have another hectare or two of coffee and hour or so up into the mountains.

Costa Rica operates under a unique regional mill system. Growers (and hired pickers, often Nicaraguan) spend the daylight hours harvesting ripe cherries to turn in the fruit to a beneficio every afternoon. No matter where or how coffee is handled it has to be processed within 24 hours- preferably less- of being picked. Costa Rican farmers can bring their coffee to the nearest mill themselves, drop it at a receiving point, or wait for a beneficio truck to come up pick it up if their farm is large-vehicle-accessible.

Once it’s at the mill it’s depulped, washed, dried and usually hulled and sorted for export en oro, as green coffee. Because Costa Rica has such a consistently wet climate, almost all coffee goes straight from being washed into a guardiola, a large rotating cylinder blasted with hot air,to be dried rather than waiting for the sun.

Because Costa Rican coffee is handed in to beneficios, coffee from up to 1,500 producers all gets mixed together at the mill. Consequently, most Costa Rican farmers have never tasted their own coffee. Only in the last few years are more and more farmers and communities experimenting with micro processing and roasting to be able to hold the final product in their hands, and in their cups. 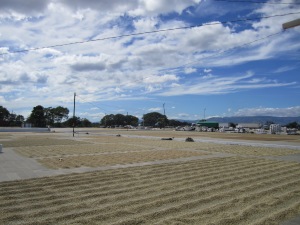 In Nicaragua the action of picking is cortar (literally translated as “to cut”) and the day’s harvest is el corte, which is measured in latas y quintales. There is no national coffee institute to centralize and regulate things like records and measuring tools.

Nicaraguan coffee farms are larger. There are many more haciendas (estates), and even the families who are smallholders tend to own more land than in Costa Rica; which makes sense because Nicaragua is a significantly larger country. But the big haciendas of Nicaragua dwarf those of Costa Rica, employing up to 1,000 seasonal cortadores. One reason less land lies in the hands of families is probably because acquiring land in Nicaragua is significantly more difficult than in Costa Rica. Nicas told me that it was not uncommon to find that two or three people held titles to the same piece of property.

Rather than being sold in fruit to a mill, café Nica is processed on the farm. Everyone who has land has a wet processing mill (beneficio húmedo), the few people who don’t have a neighbor who does. When the day’s corte arrives at the beneficio húmedo it is depulped and washed, and sometimes partly dried. Some farms immediately send their washed coffee to a dry mill (beneficio seco) to be dried, hulled, sorted and bagged for export, others partially dry it on raised beds before sending it to the dry mill en pergamino (unhulled and still with parchment paper on).

Along the Pan American highway between Managua and the northern coffee region of Matagalpa there are kilometers and kilometers of coffee laid out to dry in the sun on concrete patios or expanses of blue tarp and black plastic. The high mountains in the north are perfect for coffee: wet, cool, steep, and rich in organic material from long-standing forests. Just south of this region is a hot, dry, sunny stretch of flat land, perfect for drying thousands of pounds of coffee every day. Most dry mills also have guardiolas, but they all employ large numbers of employees to constantly turn the beans on the patios as they dry in the sun to ensure even, faster drying.

Because the dry mills are located in an entirely different part of the country than the coffee farms, that means that huge diesel trucks have to haul anywhere from 200 pounds to a full 2000 lb ton of coffee up to 3 hours each way every day. This is definitely one of the least “green” aspects of coffee (see Coffee and Climate: The Myth of Mitigation for more on this tricky subject).  Once the coffee is dry, it is hulled and packed into 100 lb (quintal) sacks for international export. Some coffee is sold to the dry mills and mixed together for more generic coffee. But because it arrives washed from farms, each load can remain separate as it dries. This means coffee can be sold by the lot, and coffee from different farms can be sold as such. This allows farms with better coffee to demand a better price.

Nicaragua’s population and poverty levels are higher, and so are the number of migrant pickers, some who travel with in Nicaragua, others who flood into Costa Rica. Many Costa Rican’s have told me, “Costa Ricans don’t want to pick coffee; they think they’re too good. They think of it as something their grandparents, or maybe even their parents did, but no young Ticos want to go to the cafetales.” And yet I’ve met whole communities filled with people ages 5-80 who are proud to say that they come from families of cafetaleros and are ready and willing to put on their basket every harvest. I’ve met people in their 30s who paid for college with money from picking coffee, and high school students who pick during school vacations to save money for everything from school supplies to jewelry. I’ve heard several times, uttered in a wide variety of tones from both Nicas and Ticos, that, “without Nicaraguans, Costa Rica coffee wouldn’t get picked.” Perhaps more accurate is, “without Nicaraguans, only Costa Rican coffee on small family farms in determined communities would get picked.”

At the end of the day someone has to pick the coffee; if not, it falls to the ground and rots. Picking coffee can be anywhere from beloved family activity to John Steinbeck style oppressive.

The differences between the coffee producing cultures of both countries are wound up in their socio-political pasts and presents and in their geography and topography. The neighboring nations sometimes work together and sometimes agains each other in the name of coffee, but together they unquestioningly contribute an important slice of Latin American coffee to the world.