On the west side, in Santa Clara, Finca Santa Teresa is offering up lata after lata of gorgeous ripe cherries. The operations of the farm don’t look much different from that of its neighboring properties, but all the shiny green trees waving in the wind kissing these cafetales are different; they’re vertically integrated—kind of.

The other factor that prevents FST from being a case of textbook case of vertical integration is the motivation behind Toby’s choice to purchase a farm in Panama. He didn’t do it because he wanted to cut costs and control the chain; he got involved in operations on the ground because he has always loved coffee and dreamed of having his own farm. “Toby has been in the coffee business for almost 20 years and started out working on farms in Brazil. Since then, in simple terms, he has always wanted to own a coffee farm and “farm.” This is a realization of that ambition,” says his partner Andre Wierzbicki.

The thing that’s cool about this case of integration is that it’s not an integration of resources or of commercial capital; it’s an integration of attitude. Now, because Toby-the-man is involved in decisions around the sourcing and roasting of coffee, as owner of Toby’s Estate, as well as being involved in decisions on the farm, as part owner, the attitudes, worldview, and values of one person are integrated from the farm (one of numerous Toby’s Estate buys from) through to the cup served at the café.

It’s not often in coffee that the values of one individual can make it from ground to grounds, but here they can, and they can precisely because that was the intention of integration in this case.

And if there were ever one person’s values and attitudes to be integrated from a farm in the mountains of Panama all the way to a to-go cup on the streets of Brooklyn, Toby’s values are ones I’d certainly support integrating. His coffee odyssey makes mine look like a blink. He started his journey living and working for a few years on coffee farms in Brazil, then founded and grew to stardom Toby’s Estate, and then took an epic international coffee voyage from Ethiopia to Yemen to Indonesia to Costa Rica and many more stunning coffee places, all in the company of a stellar photographer. His resulting coffee book, Coffee Trails, is everything a coffee table book should be, filled with brilliant photographs and interesting facts.

His attitude is evident in the pages as he narrates his journey, and his values carry through to the public educational cuppings held every week in Brooklyn and other hallmarks of the Toby’s Estate brand. His values are integrated into FST as well, where the farm is training former pickers to move up the chain and become beneficio managers and quality control engineers and the farm as a whole is about to earn UTZ certification. 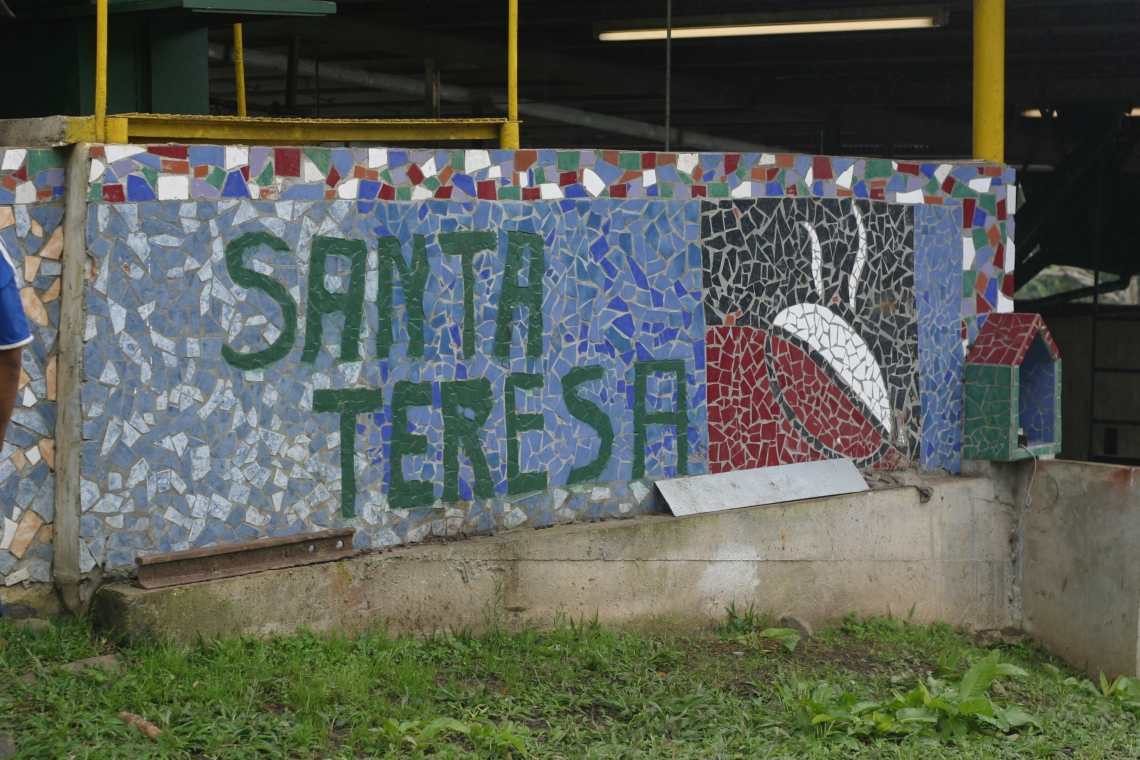 On the west side of Volcán Barú, Finca Santa Teresa, its coffee trees so similar to those on the neighboring farms, is guided by an integration of ideas that spans oceans and links coffee production and commercialization to roasting and consumption. This integration is organic in the sense that it comes from a natural place; Toby always wanted to have his own farm and grow coffee himself. He didn’t buy a farm because a balance sheet dictated that that would be the best business choice. But the integration in the case of FST is inorganic in that it’s happening in reverse. Toby was already roasting, a link very far down the coffee chain, when he decided to become involved in the earlier steps of growing and processing.

On the east side of Volcán Baru, nestled in the hills of Jaramillo outside of Boquete, Don Tito (p. 226) is pursuing equally organic vertical integration, but in the opposite direction. Like Toby, Don Tito is passionate about coffee and has dedicated his life to it. He is also committed to doing things well because that’s the only way he can do them. Don Tito hasn’t been to Ethipoia or Yemen, but his worldview is still global because his coffee crosses oceans he never will.

Don Tito grows and processes coffee on the finca he bought and started from nothing as a young man, and now has buyers in Japan, Korea, France, Canada, and the United States, all paying above market price per pound for his various lots of Geisha, Honey processed Typicas and Catuais, and now even a few Naturals. But, as any caficultor will tell you, growing coffee alone—even differentiated specialty coffee—you can barely make a living.

So in 2000 he started giving tours of his farm himself, and now charges guides what he jokingly calls a “tax” for them to give tours of his property. He has a little roaster he built himself (like every other machine and building on the farm) and sells bags of roasted and ground coffee to the visitors who come on the tours.

When I visited him last week he told me, in a comment that eerily echoed the concept behind the Affinity post I had written the day before, that “coffee growing is something you only do because you’re passionate about it. It’s not a business. The business belongs to the person selling the cup.” He vocalized what many other coffee growers before him have repeated and what every single one knows even if he never says it out loud: there’s a whole lot more money farther up the chain.

Don Tito is making plans to take on the final link in this chain, and then be able to call his Finca La Milagrosa a truly, 100% vertically integrated business, from crop to cup, from ground to grounds. He already grows, processes, and roasts coffee; now he just needs to serve it. He is looking around town for possible places to set up a café, to be able to proudly hang a sign saying “serving Finca La Milagrosa coffee!” He wants to be able to look at a café full of people sipping cups of coffee he made—at every step—himself, and he also wants to be able to enjoy the profits from all those sips.

Vertical integration works differently in different industries, and in coffee its becoming more and more possible for producers at origin to integrate up the chain all the way to serving the coffee they sell and for roasters on continents where coffee doesn’t grow to pack their bags and get to work in places where it does.