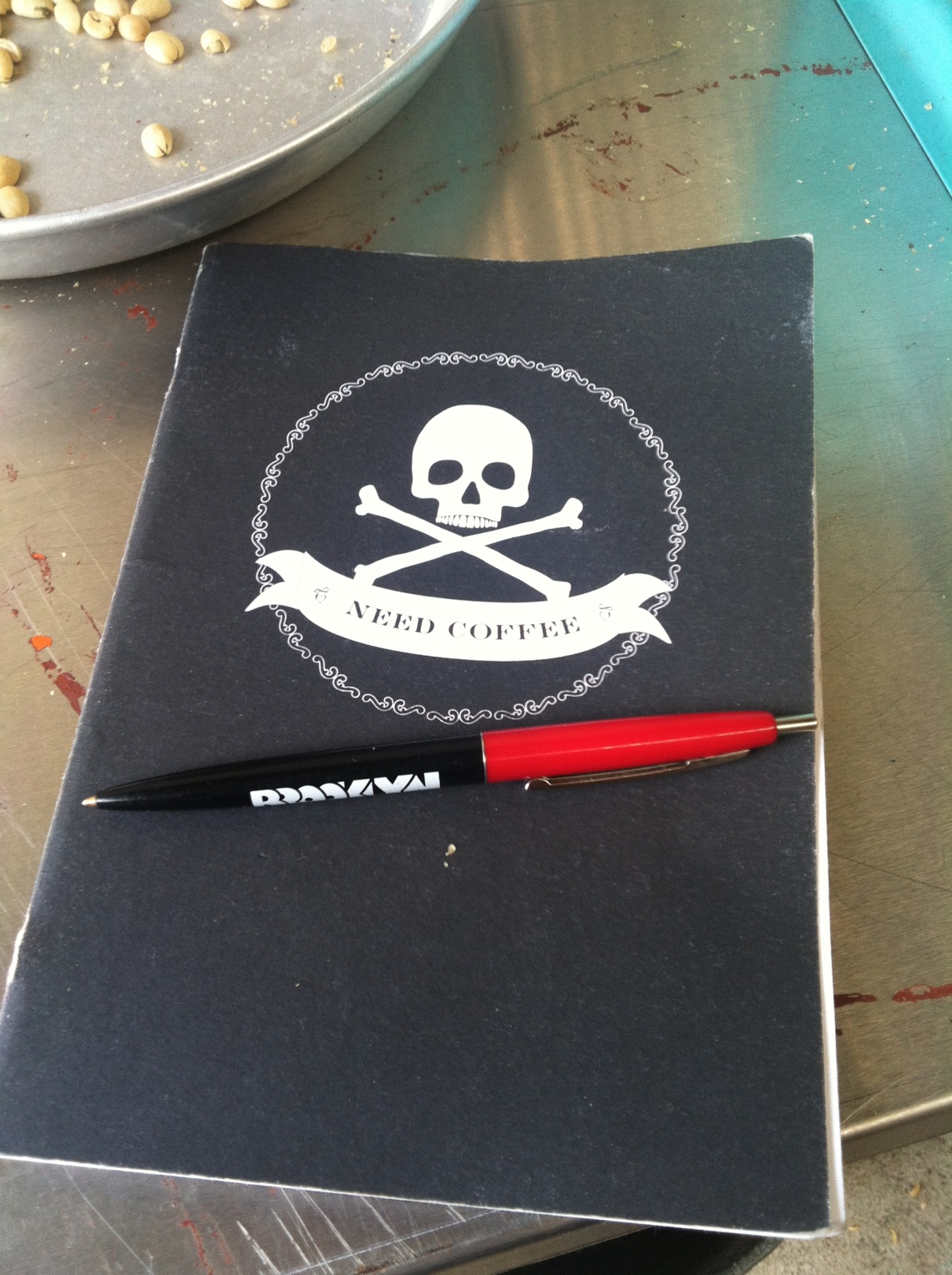 Part 1 of 3 in a series less about coffee and more about travel, culture, and living abroad.

Back in high school, during my year as a foreign exchange student, I developed several rules to live by. One was the “new day new place rule,” which ruled that every day I had to go someplace I had not been before, even if it meant just getting my coffee at the bakery right next door to the place I usually got it. Sometimes this initiative took me around the block, and sometimes it took me to islands and villages and castles. This was an effort to see and get to know the city of Alicante and the country of Spain as well as possible in order to make the most of the ten months I had there.

Another Spanish rule was to always always always run through the Big Three checklist before I walked out the door of the house (or anywhere else). Keys wallet cell phone. I always physically touched all three items in my purse to make sure that I didn’t just “think I threw them in there.” I’ve since broken that rule a few times and forgotten my keys here or there, but for the first year of observation, that rule worked like a charm.

Another Spanish rule, one that has become habit in the past ten years, was that in addition to the big three items mentioned above, I always had to have a pen and paper on me. I never knew where any given day would take me, and I never knew when I’d need to write down names and directions, recommendations, new words, to do lists, or any manner of notes.

The little notebooks I carried with me quickly became postmodern reflections of rage, frustration, discovery, cultural observation, humor, love, and quotidian survival. In the past ten years I’ve flipped back through those notebooks a handful of times, remembering what it felt like to write the words in another time and place as I read back over them in a new here and now. I’ve often thought that one day I’ll type up all the contents of those little notebooks, along with the stacks of handwritten journals I kept and letters I sent over the year, to make some sort of compilation that will attempt to capture the fantastic existential tumult that always accompanies being a small town 16 year old alone in a foreign country.

But I don’t know if the words would survive the transition to standardized typeset and ink. In my notebooks, franticness of new phrases is captured in the lilt of a scrawl; the methodical determination of a to-do list comes from the purpose and weight of pen pressed into page. The notebooks themselves are commemorative vessels, dog eared and dirty objects symbolic of all the places they accompanied me.

I never choose my notebooks lightly; I know they will become intimate parts of my daily life, something I take in and out of my bag more often than any of the Big Three. I choose notebooks that have a good feel to them, a good size and weight. Sometimes I want ones with brilliantly colored intricate designs. Sometimes I seek simplicity. But I know that the pages of any notebook that becomes my daily in-purse writing place, thus fulfilling the rule to never be without pen and paper, will contain thoughts, lists, names, numbers, notes, and ideas that exist nowhere else. These notebooks always live at the bottom of my purse, but they see the fluorescent light of late night subway cars, the sweaty sun of street corner benches, the dim glow of bars serving $1 national Centroameriana beers, and the drench from skylights above family kitchen tables.

Nothing is as infuriating as having paper and no pen, so I try to keep at least three or four on me at all times, because pens are like lighters, you lend them to someone for a minute and often never see them again. A notebook filled with notes is irreplaceable, but pens are more nomadic, and my attachment to them is null. I know some people who have to have everything in their written agenda be in the same ink. I don’t mind mixing blue and black, thick bleeding or freebie bank pen thin; pencil and marker and highlighter. Pens walk, so any one will do. I never make any extraordinary efforts to hold onto pens, but every now and then there is one that hangs around, and there is a certain satisfaction to using a pen until it runs out. The same way picking up a notebook filled with all words and no blank pages feels like a monumental accomplishment, so does extracting all the words a writing utensil has to give.

When a pen gets to the point where it can write no more, I always inadvertently hold a sort of mental memorial service, making a rapid inventory of all the hands that pen has been in and all the words it’s written. 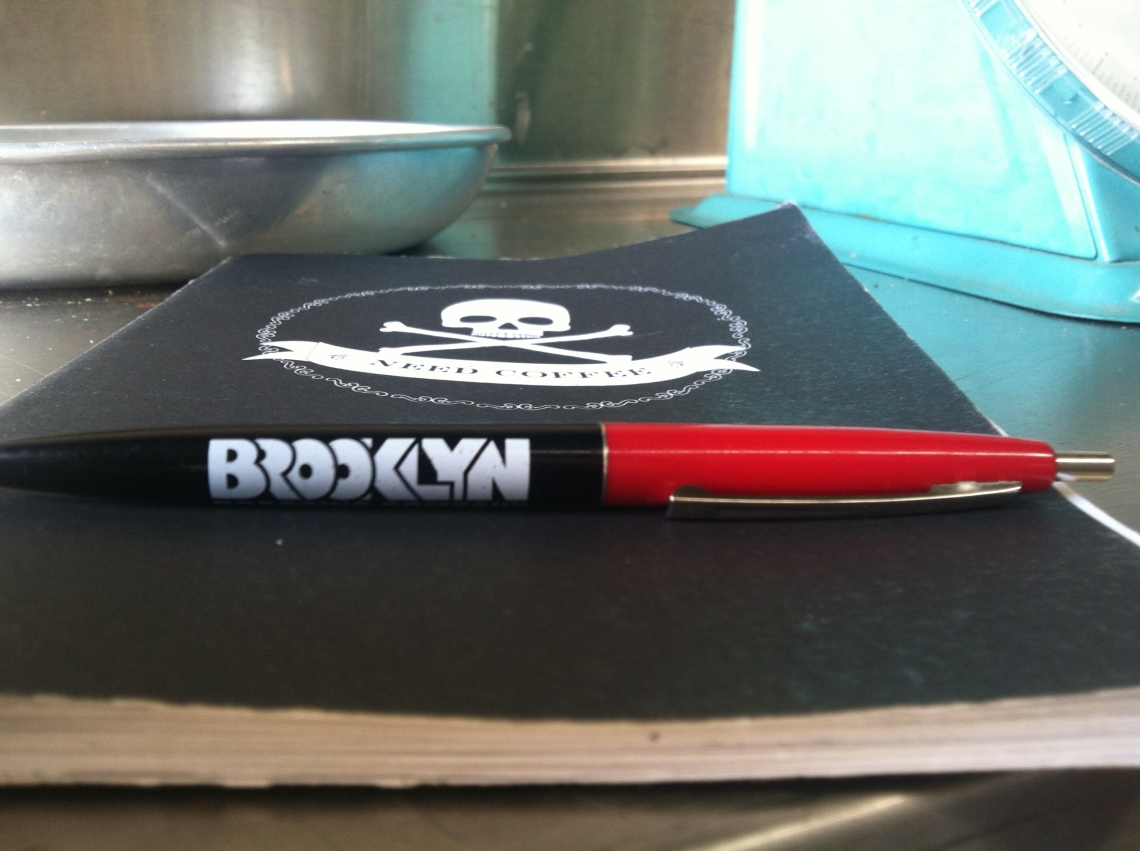 Right now, this Brooklyn Roasting pen is on its last leg. Since June it’s taken notes about New York coffee shops, documented Kickstarter distribution lists, and even inscribed some “When Coffee Speaks” books. It’s been lent to friends to sign receipts for brunch and bus tickets. It’s been lent to strangers to write down directions and, as I write this on the memo app of my iPhone (which has learned to coexist harmoniously with any given paper notebook), is now in the hands of a Talamanca native Costa Rican filling out his customs form.

A fraction of an ounce of ink encased inside a few pieces of plastic can get you across borders; it can confirm identities, forge new ones, and tally sums of a thousand hours of thinking and living.

Writing this on my phone is cool because I won’t have to type it later in order to digitally share it with the world, and I’ll never have to worry that you won’t be able to read my handwriting (which is pretty bad… I’ve been told it looks like a middle school boy’s). But there are still some things, the most emotional and experiential, that have to be written with pen on page. Anyone who’s a list maker will tell you that there is no digital way to replicate crossing something off a list that compares with the vanquishing feeling of a pen making a sharp slice through something you’ve done.

It’s actually just shy of ten years that I’ve been traveling, living abroad, living domestically, and doing all the pen on paper writing involved with the logistics of life as a writer, both paid and un. In what’s quickly approaching a decade, there have been many notebooks, envelopes, napkins, and paper scraps that hold the words by which I became who I am right now, sitting in the tin-roof shade on the Panama-Costa Rica border. In the next ten years I plan to stick to all the Spanish rules and to continue to hop from one paper lily pad to the next, always sorting through life wherever I am by putting pen on page.

Freelance writer and author/editor of the book, When Coffee Speaks: Stories from and of Latin American Coffeepeople. View all posts by Rachel Northrop

© Rachel Northrop and whencoffeespeaks.com, elcafehabla.com, rachelnorthrop.com. 2016. Unauthorized use and/or duplication of this material without express and written permission from this site’s author and/or owner is strictly prohibited. Excerpts and links may be used, provided that full and clear credit is given to Rachel Northrop and whencoffeespeaks.com, elcafehabla.com, or rachelnorthrop.com with appropriate and specific direction to the original content.